Amazon Prime Day is coming soon — Amazon announced today that the annual event will kick off on June 21 and run through June 22.

During the event, Prime members will be able to take advantage of sales and deals on select products sitewide, from tech and small appliances to clothing, home decor and more. The annual Amazon Prime Day sale, which began in 2015, has grown so vast that it’s caused other retailers like Walmart, Macy’s and Target to offer their own counter deals, which we expect to see again this year. “Prime Day is no longer just a day for people to purchase cheap items on Amazon,” CNBC’s Annie Palmer told us in our history of Amazon Prime Day. “Quite frankly, it has completely altered the retail calendar.”

To help you make the most of Amazon Prime Day 2021, we consulted multiple experts to better understand how the sale will look this year and what types of products you ought to consider once it begins.

When is Prime Day 2021? It will be earlier than in previous years.

Besides Amazon Prime Day 2020, which was delayed as a result of the coronavirus pandemic, Prime Day historically takes place sometime in mid-July (the first date for Prime Day’s inaugural 2015 event commemorated the retailer’s then-20th anniversary). This year, however, Prime Day will take place on June 21 and June 22. Recent reports claim that the earlier June start date could be timed against the rescheduled 2021 Olympics and the projected July travel boom surrounding it.

Last year’s delayed mid-October dates brought the event closer to notable sale events like Black Friday and Cyber Monday. As Shopping previously reported, the onset of coronavirus, an economic downturn and other factors all contributed to the company’s decision to ultimately postpone its annual sales event. “The pandemic caused many retailers to suffer supply and demand issues due to the increased amount of shoppers buying online as we all hunkered down at home,” said Sara Skirboll, shopping expert at RetailMeNot. “Amazon waited until they had their inventory and shipping under control, hence the move to October 13 and 14 last year to help kick off the holiday shopping season.”

But despite the delay and the effects of the pandemic, marketing research company Digital Commerce 360 estimated that Amazon’s sales during last year’s Prime Day hit $10.4 billion globally over the two-day period, up 45.2 percent from $7.16 billion in 2019. Prime Day sales from third-party sellers also saw a nearly 60 percent increase from the year prior and surpassed $3.5 billion in sales, according to Amazon.

What is the benefit of Prime Day?

Overall, Amazon Prime Day provides Prime members the opportunity to shop for a range of products at significant discounts — its growth into competing retailers means more discounts across more categories and stores, too. Last year, Prime Day benefits weren’t just limited to shopping on Amazon — members were eligible to earn up to $50 in credits to use on Prime Day by shopping at Whole Foods or other Amazon-owned retailers with the “Spend $10, Get $10” promotion. While Amazon confirmed that this promotion won’t take place for Prime Day 2021, shoppers can still be on the lookout for the following pre-Prime Day incentives:

According to Skirboll, it’s never too early to start planning for Prime Day. She suggested keeping in mind Lightning Deals, which are “limited-time offers that only give shoppers a short window of time to purchase and check out before missing out on the savings.” To really take advantage of the sale, Skirboll also recommends:

Do I need a Prime membership to get the Amazon Prime Day discounts?

Yes — Prime Day discounts on Amazon are exclusive to Amazon Prime members (both existing and new), currently 200 million strong across 19 countries. Yearly membership is priced at $13 per month and includes a 30-day free trial (which you can sign up for right before Prime Day if you haven’t used yours already). Plus, students can register at half the price ($7 per month) and receive a six-month free trial. They’ll also get exclusive offers on everything from Amazon Video and Amazon Music to Kindle Unlimited and discounts on textbooks.

Starting today and for a limited time, those who sign up for Prime using an Echo device will receive a $5 Amazon credit — to trigger the coupon, just say, “Alexa, sign me up for Prime.” Through June 20, Prime members can also get a $10 credit with the purchase of $40 or more in select Prime-branded Amazon gift cards, which can be spent on a Prime membership or other Amazon items.

Prime Day 2021 will be live for a full 48 hours, starting on June 21 and ending on June 22. During the sale, you’ll find a number of deals on select items sitewide, including beauty products, home decor and various tech — Prime Day-adjacent sales at other retailers might begin earlier and might end later than the sales event on Amazon.

Experts noted Amazon devices and services are also traditionally heavily discounted during Amazon Prime Day — they’re typically among the top sellers. Skirboll recommended keeping an eye out for discounts on Amazon Basics and Amazon devices like the Echo models, Fire Sticks and Kindle. “Even newer devices like the Amazon Halo fitness tracker will especially see deep discounts to entice shoppers,” she said.

Throughout the sale, other retailers will also be offering competitive discounts. Data collected by Digital Commerce 360 showed that in 2020, a sizable number of North American retailers capitalized on the influx of web traffic from shoppers during Prime Day, according to the organization’s research and editorial director Fareeha Ali. The data found that 51 percent of the top 100 online retailers offered widespread sales on the first day of Prime Day 2020 beyond their normal year-round promotions.

Walmart already announced its “Deals for Days” savings event, which will take place between June 20-23 and will include sales on electronics, home, toys, beauty, fashion and more. Target also announced its “Deal Days” event slated for June 20-22 that’ll feature deals on everything from electronics and home essentials to toys and groceries.

What is the best deal on Amazon Prime Day?

While there is a plethora of items offered at deep discounts sitewide, Amazon Prime Day is notable for its sales on top performers like the Instant Pot, which saw 24,000 sales during 2015’s Prime Day. Since then, sales of the popular Instant Pot have dramatically increased to 215,000 in 2016 and 300,000 in 2018, as CNBC previously reported. Additionally, 3.5 million toys were sold in 2017 during Prime Day. Although the best deal on Amazon Prime Day 2021 isn’t known at the moment, Digital Commerce 360 has reported that Amazon’s own products, the iRobot Roomba Robot Vacuum and the LifeStraw Personal Water Filter were some of the bestselling items during Amazon Prime Day in 2020.

According to expert guidance, we can anticipate sales and deals in various categories this year, including smart home devices and TVs, as well as discounts on fashion, beauty, pet products and tools. Vipin Porwal, founder of and consumer expert at Smarty, also predicted health and wellness products will see discounts this year. “Expect competitive Prime Day deals ranging from 20 to 30 percent off items like air purifiers, massage therapy, home fitness gear and activewear,” he said, noting you should also plan to take advantage of savings on touchless tech for the bathroom, like bidet seats and UV sterilizers.

You can also find multiple early deals in the days leading up to Prime Day, including from brands like LEGO, Mattel, BLACK+DECKER, and Le Creuset.

What should I not buy during Amazon Prime Day?

Skirboll noted that we shouldn’t expect to see many competitive discounts for gaming consoles, toys and cameras this Prime Day, and advised to look out for those sales during Black Friday and closer to the holiday season. Additionally, Porwal said not to expect sales on Amazon from electronics brands that compete with Amazon devices, like Google, Samsung and Apple — we’ll be reporting on Prime Day sales at other retailers and surface the ones they offer in the space. He also noted that since Prime Day will be held ahead of big back-to-school sales this year, there likely won’t be a large selection of computing devices (laptops, tablets, computers and monitors) on sale, “so it’s best to wait for these items later in the summer when all retailers will compete for these purchases.”

This 7.25-quart Dutch oven from Le Creuset is an investment piece that should survive getting passed down across generations. Todd Gray, executive chef and co-owner of Federal Fritter in Rehoboth Beach, Delaware, told Shopping in our guide to Dutch ovens that he’s a fan of the bright color options and the enameled cast iron material.

Amazon is also offering early Prime Day deals on its Fire TVs, starting at $100. This 32-inch option from Toshiba has Fire TV built in so you can access your favorite streaming services, and the voice remote uses Alexa to help you navigate channels and find the movies and shows you want to watch.

The Roomba 694 features WiFi connectivity to control it via the iRobot HOME app. It also has a sleek design and dual multi-surface brushes to easily pick up dirt from carpets and hard floors. Sensors allow the robot vacuum to navigate under and around furniture and edges in your home, while also alerting it to clean high-traffic spots around your home more thoroughly.

These active noise cancelling headphones can make you feel like you’re suddenly in a quiet room, but they still let in some sound through their microphones if you want to hear it. The headphones have a bass-heavy sound and the Sony app has a built-in equalizer that’ll help you adjust it to your liking. They’re also equipped with Amazon Alexa, so you can get hands-free voice access to music and other smartphone features.

The latest Echo features a built-in clock and a spherical, clean and compact design. It also equips Alexa and you can conveniently connect it to other Echo devices to make announcements throughout your house. You can also get the smaller Echo Dot at a discounted price, which will give you virtually everything the larger flagship Echo gives you but in a smaller package and likewise sporting smaller components.

Catch up on the latest from NBC News Shopping guides and recommendations and download the NBC News app for full coverage of the coronavirus outbreak.

Sam's Club is testing a scan-and-ship option for shoppers 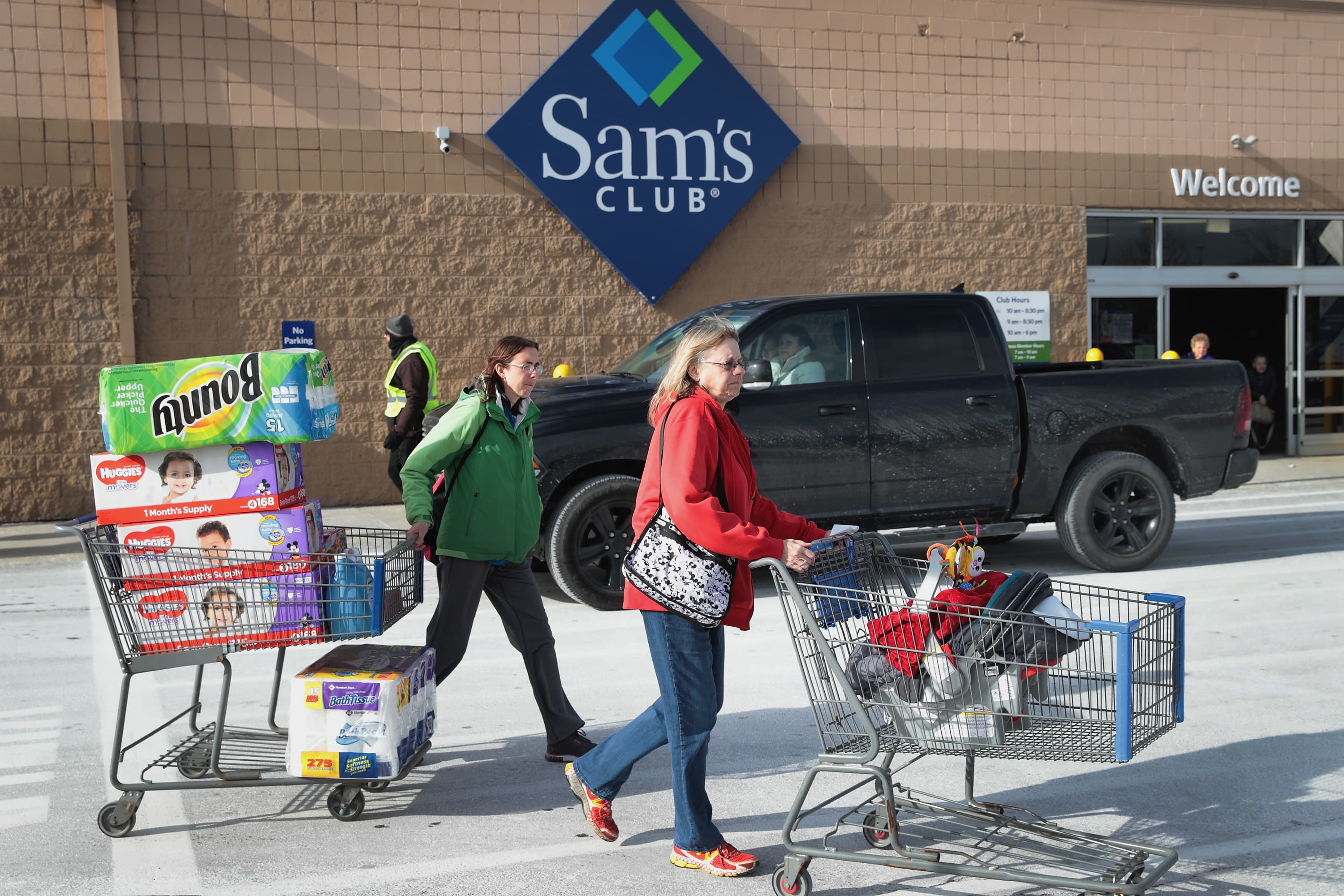