Over the years there have been many iconic royal wedding dresses, from decadent lace designs through to jewel-encrusted beauties, but which one is the most popular? Is it Kate Middleton‘s long-sleeved number she wore in 2011 or perhaps Princess Diana‘s huge ballgown with its record-breaking train? Seven Stone has revealed the most searched for royal wedding dresses – keep reading to see who takes the top spot…

WATCH: 7 of the most expensive royal weddings of all time

Princess Anne wore a statement gown for her first wedding

Princess Anne was the first of the Queen and Duke of Edinburgh’s children to get married, and she was also the first to have a second marriage. For both ceremonies, she chose beautiful outfits, opting for a Tudor style dress made by designer, Maureen Baker for her wedding to Captain Mark Phillips in 1973.

The dress featured a fitted bodice with high neck and flared skirt that led to a seven-foot-long train. The dress was made from pure white silk, whilst a white tulle veil was held in place by the same fringe tiara that Queen Elizabeth II had worn for her wedding in 1947 and which Princess Beatrice would use for her marriage in 2020.

For her second wedding to Sir Timothy Laurence married in 1992, Anne chose a more lowkey wedding ensemble. The bride wore a high neck midi dress with a white jacket. She accessorised the chic look with black court shoes and her usual beehive.

The Queen’s sister’s wedding dress went down in history

Princess Margaret‘s choice of wedding dress has gone down in fashion history, inspiring brides today with its simplicity and elegance.

She turned to royal couturier Norman Hartnell to design her gown – the same designer who had made her sister the then Princess Elizabeth’s wedding dress.

The bride opted for an understated dress, with a fitted, tailored bodice and waist, long sleeves, and full-length skirt.

Unlike many other royal dresses, this one had no embroidery of flowers or other motifs. Instead, it was made from plain, silk organza, which makes it refreshingly modern.

The Queen’s wedding dress was bought with rationing tokens

When Queen Elizabeth II (then Princess Elizabeth) married Prince Philip, she had to purchase the material with rationing tokens, given that it was just after the Second World War. However, that didn’t stop her dress being anything less than breathtaking.

Designed by the Court Designer Norman Hartnell, and inspired by Botticelli’s famous painting Primavera, her wedding dress featured a 15-foot train as well as a fitted bodice and a floor-length panelled skirt. It was decorated with crystals and 10,000 seed pearls, all imported from the United States of America.

Princess Eugenie married Jack Brooksbank in 2018, and she wore a show-stopping gown by Peter Pilotto and Christopher De Vos.

A press release from the Royal family explained: “During several fittings the dress was developed layer by layer, constructing it from the corset and the complex underskirt to the fitted bodice and full pleated skirt. The dress features a neckline that folds around the shoulders to a low back that drapes into a flowing full-length train. The low back feature on the dress was at the specific request of Princess Eugenie who had surgery aged 12 to correct scoliosis.”

The dress also featured personal symbols that are especially meaningful to the royal, including a Thistle for Scotland, a shamrock for Ireland, the York Rose, and ivy to represent the couple’s home.

It comes as no surprise to see Princess Diana’s wedding dress near the top of the list as it was definitely an iconic style of its time.

The wedding of Prince Charles and Lady Diana Spencer, which took place on Wednesday 29 July 1981 at St Paul’s Cathedral in London, swept the world off their feet, with 750 million people tuning in.

Her ivory taffeta wedding dress was created by British designers, Elizabeth and David Emmanuel, and it received press all over the world.

The bodice of the dress features a piece of antique Carrick-ma-cross lace that once belonged to Prince Charles’ great-grandmother, Queen Mary.

The ivory silk taffeta and antique lace gown had a 25-foot train and a 153-yard tulle veil. The look was said to have been inspired by both Queen Victoria and Queen Mary’s style.

The Duke and Duchess of Cambridge tied the knot at Westminster Abbey on 29 April – with millions of people across the world tuning in to see Kate Middleton’s gorgeous wedding dress.

MORE: Did you spot how Kate Middleton broke royal protocol on her wedding day?

The dress featured a v-neckline, long sleeves, a fitted Victorian bodice and, in signature McQueen style, padding on the hips. It was covered in handmade lace created by the Royal School of Needlework. The youngest lace-maker on the team was 19 years old at the time.

Images of roses, thistles, daffodils, and shamrocks were placed on both the bodice and skirt by using a nineteenth-century technique called Carrick-ma-cross which was also used to make Princess Diana’s gown.

Meghan Markle’s wedding gown is the most searched royal dress

Meghan Markle‘s wedding dress is officially the most searched for wedding dress in the British royal family, with a whopping 20,000 searches per month globally!

After months of speculation, Meghan Markle’s wedding dress was finally revealed as she stepped out at St George’s Chapel at Windsor Castle in 2018.

The dress was designed by British designer Clare Waight Keller, who is also the artistic director of French fashion house, Givenchy.

Meghan’s minimalist pure white gown featured a boat neck, which framed the shoulders and emphasised her waistline. It also had three-quarter length sleeves and was made of double-bonded silk cady cushioned by an underskirt in triple silk organza.

Make sure you never miss a ROYAL story! Sign up to our newsletter to get all of our celebrity, royal and lifestyle news delivered directly to your inbox.

Tue Aug 3 , 2021
Amazon noticed physical-retail store sales bounce back again from a double-digit drop to a double-digit gain in reporting solid total revenue and earnings for its fiscal 2021 second quarter. For the quarter ended June 30, net gross sales totaled $113.08 billion, up 27% from $88.91 billion a calendar year before, […] 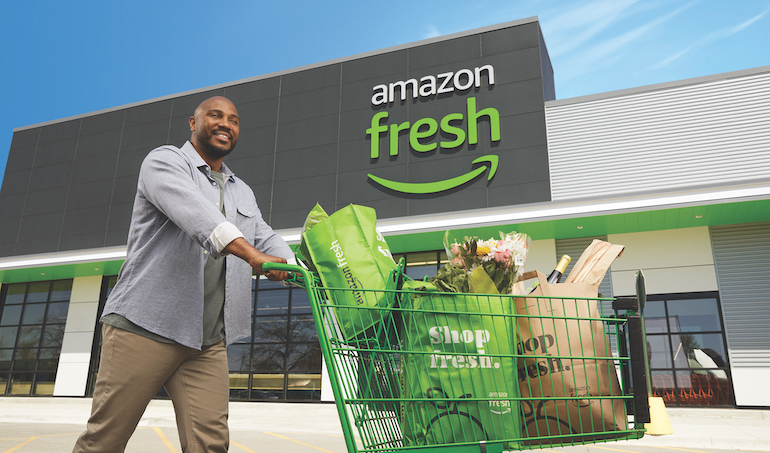